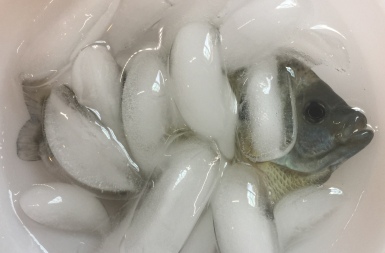 Putting fish on ice helps keep it fresh, which keeps the meat from getting soggy when cooked.

Scale and gut them before cooking, but the head and fins are purely and issue of presentation.

We try not to waste anything around here.  We also try not to be hoarders, crushed to death under worthless junk.  It’s a balance.

I was especially struck in college, during a class called Food, Health, and Sustainability, by a concept that I was completely unable to understand at the time.  The nitrogen cycle.  I was struggling in class, partly because I lacked the hands on knowledge so necessary for me personally to turn written word into comprehension, and partly because I had let more dominate classmates essentially press me into scholarly servitude (which was undermining my confidence just a little).  There was a paper with a picture of a farm, an explanation of how nitrogen moved around that farm, and suggestions on how that farmer might keep nitrogen from leaving the farm.  It made as much sense as Spanish class, and all I can communicate in Spanish is tears.

There was no part of the nitrogen cycle that I could even approach with understanding.  But now, having lived on a farm it all makes a huge amount of sense.  Things have nutrients, nutrients make other things live.  Nutrients can be used, reused, and passed around, as long as they don’t leave the farm.  Now I understand.  Things should come to the farm, they should not (for the most part) leave the farm.

Which is why we don’t just throw food away.  In stocking the bluegill pond this year, we retrospectively realize we made a mistake.  We purchased a combination of standard and hybrid bluegill.  The thinking was that people would like to catch the larger hybrid bluegill.

In reality we mostly have children fishing here, and children don’t care if their bluegill is 4 inches or 9 inches.  They’re just really happy to catch fish.  The problem we have now is that the hybrid bluegill have huge mouths.  Far larger than the standard bluegill.  Even with our careful hook selection and modifications we cannot keep the larger hybrids from swallowing the hooks to a fatal extent.

But they don’t go to waste.  When we have a fish that just can’t make it he comes home for supper.  There’s not a huge amount of meat on a bluegill, but they are good eating for fish.  I like to fry them whole because it’s easier, and it gives our daughter something to talk about for days.

I didn’t grow up eating fish so cooking them was daunting at first, but it really isn’t that hard.  They cook fast, so you just fry them until they are fork tender.  If you bread them this will be when the breading is golden brown.  And always remember, undercooked fish is still food, overcooked fish is why most everyone hates eating fish.