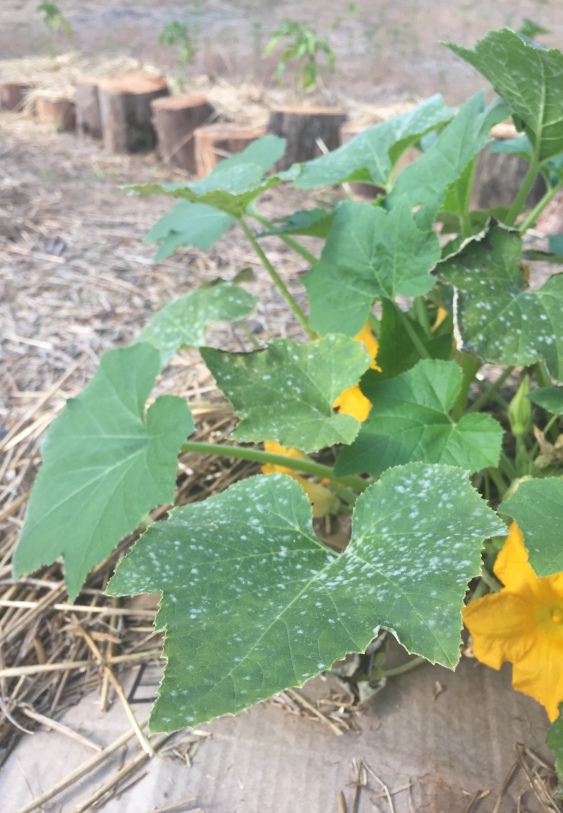 Gardening here sometimes feels like an exercise in loss.  We can never know exactly why it will fall short of our expectations, but somehow, it will.  Admittedly it’s usually due to a combination of neglect on my part and enthusiastic labor on the part of the deer, Japanese beetles, and weeds.

This year our little garden found something new, at least new to me.  Powdery mildew.  That’s what the internet told me it was.  These awful white spots showed up on the squash, spread quickly, and started killing it all.

We’re not strictly organic but it’s something we talk about a lot.  Ultimately organic produce is the direction we would like to go, but it take a lot of infrastructure to make it efficient and economical.  In some places though organic management is necessary, and the squash plants are one of them.  These plants are planted along the slope directly above our pond so anything we put on the plants will run down and accumulate in the pond with our fish.  For this reason whatever we do with the plants must be not only organic, but also harmless to the fish.

After researching a while the best options appeared to be sulfur or milk.  Sulfur will end up in the pond and could change the pH, which is too risky.  So we’re going to give milk a try.  The milk should be diluted 1 part milk to 10 parts water, and sprayed in the late morning so that it will be exposed to the sun.  It is also important to spray both the top and bottom of the leaves as the mildew can cover the whole surface.
It’s too soon for us to say with confidence if it’s working, but it does certainly seem to be helping.